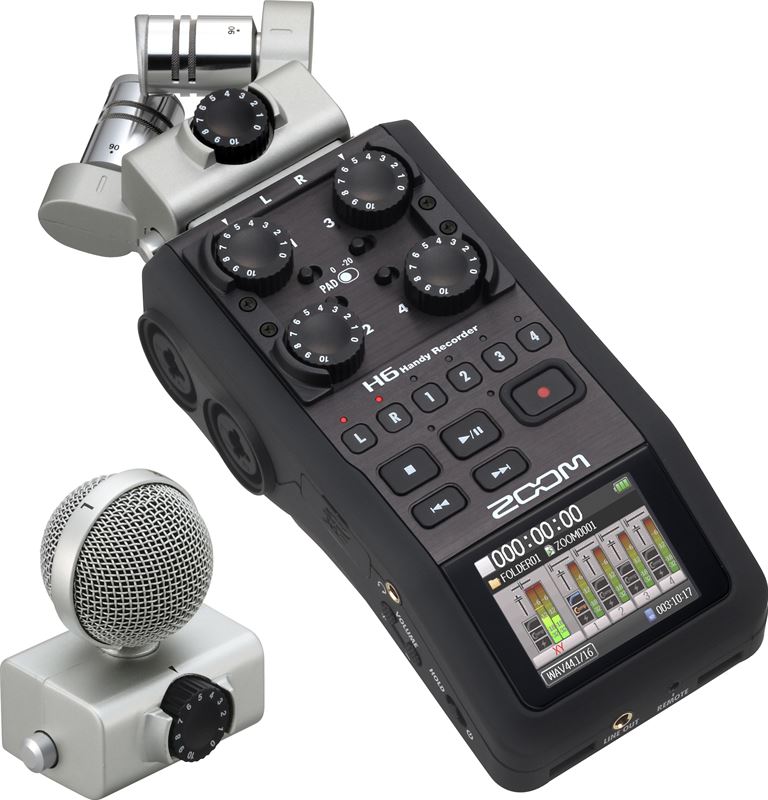 Download handleiding: Zoom H6
Here at Zoom we've been building innovative products for the past thirty years. But with the revolutionary H6 six-track recorder, the bar is raised further still. Four interchangeable input capsules – X/Y, MS, Shotgun, and Dual XLR/TRS Combo – make the H6 the ultimate chameleon of the audio world, and its advanced preamps make it the best-sounding one too. Whatever your application – live recording, professional film/video work, live broadcast or electronic news gathering – the H6 can handle it with ease.

Inputs
The H6 offers four main inputs (1-4), plus two additional inputs (L, R) that are derived from whichever capsule (X/Y, MS, Shotgun, or Dual XLR/TRS Combo) is plugged into the unit. The supplied XYH-6 X/Y capsule also provides a secondary input for connecting an external mic- or line-level signal via a stereo ⅛” Mic/Line In mini phone jack. When a connection is made to that jack, signal from the X/Y microphones is muted.

All four main H6 inputs (inputs 1-4) are combo connectors that can accept either XLR or ¼” balanced or unbalanced phone cables. They can handle both mic- and line-level signals, which means that you can connect either external microphones or line-level devices like mixers, portable music players, electronic keyboards, or electric guitars or basses with active electronics (passive electric guitars or basses can also be connected with the use of a mixer or effects device). Internal switching contacts automatically detect the circuit of choice.

Each of the six inputs (that is, 1-4 as well L, R) have a dedicated gain control knob as well as a -20dB pad, allowing you to prevent distortion even when high-level signals are introduced. In fact, with the use of the Pad switch, the H6 can input a signal 30dB louder and 14dB softer than any other Handy Recorder model. In addition, all capsules utilize higher voltage preamps (5 volts instead of the more commonly used 3 volts) for distortion free recording, even at high volumes. A built-in instrumentation amp allows signals to be transmitted with minimal noise even when long cables are used.

If you’re using high-quality condenser (powered) microphones with the H6, no problem—a simple menu option allows the unit to provide Phantom Power (either +12, +24, or +48 volts) to any or all of the main inputs (inputs 1-4). Inexpensive condenser microphones requiring Plug-In Power (2.5 volts) can be connected to the X/Y capsule’s stereo 1/8” Line In jack.

Outputs
The H6 Line Out is an unbalanced stereo 1/8” phone jack, located on the bottom of the H6, beneath the LCD display. It carries the analog stereo output signal, as determined by the H6’s internal mixer.

The H6 USB port, located on the side panel to the right of the LCD display, provides a digital output of either a stereo mix or the six individual input signals, depending upon the setting of the “Audio Interface” function in the USB menu.

In addition, the H6 provides a headphone output with a dedicated volume control, located on the side panel to the left of the LCD display. Connect your headphones to its stereo 1/8” mini phone jack for private monitoring of the stereo output signal.

The H6 even has a built-in speaker, located on the underside of the unit, for fast monophonic monitoring of the recorded signal without the need to make any connections whatsoever. This speaker is automatically disconnected when connection is made to either the Line Out or Headphone output.

Never miss a take
- Pre-Record
The interview started a split-second before you were ready. The conductor lifted his baton just as you were checking a cable. The talent went back on-air a moment too soon.

No problem… as long as you’re using the H6. Its Pre-Record function automatically keeps the H6 silently but continuously recording in the background, all the time. Then, when you hit the RECORD button, it keeps the previous two seconds and appends it to the beginning of the file. It’s as if the H6 had started recording two seconds before you actually got to hit the button.

- Backup-Record
Backup-Record—the ultimate safety net. When turned on during the recording of WAV files, the H6 automatically records a duplicate set of L/R tracks, but with 12dB less input gain. Even if the original L/R track is distorted, chances are the Backup version is fine.

You can listen to either set of tracks simply by going to the Backup File option in the PROJECT menu. When turned OFF, you’ll hear the original L/R tracks; when turned ON, you’ll hear the lower-level Backup tracks instead. Pick the one you prefer and use it as your L/R master. Bacon saved.

- Auto-Record
The Auto-Record function allows the H6 to automatically start recording when a certain level of sound is detected. When turned ON and the RECORD button is pressed, the H6 doesn’t immediately start recording; instead, it goes into a standby mode; as soon as an incoming signal exceeds the Start Level you’ve set, recording begins.

There’s an equivalent Auto-Record Stop function, too. When turned ON, as soon as incoming signal drops below the Stop Level you’ve set, recording ends.

Time is on your side.
The H6 requires just 4 AA batteries—either alkaline or rechargeable NiMH—for power. Battery life (when using alkaline batteries) is more than 20 hours, even during continuous recording. An optional AD-17 AC adapter (included in the APH-6 Accessory Pack) allows you to power the H6 from any standard wall socket.

To compress or not to compress.
The H6 can record audio in two different basic file types: WAV and MP3. The main difference between the two is that WAV files are uncompressed; that is, they contain all the recorded data without any “bits” (digital words) being removed. Thus, they provide full fidelity without compromise.

Do it yourself never sounded so good
The H6’s USB port allows it to send and receive digital data. Connect the H6 to your laptop or desktop computer via USB, launch your favorite DAW or use the included Cubase LE software, and start laying down your tracks. You can even connect the H6 to an iPad (camera connection kit required).

When the H6 is set to “Stereo Mix” in the USB menu, it acts as a 2-input / 2-output interface; when set to “Multi Track,” it acts as a 6-input / 2-output interface. The H6’s onboard INPUT&OUTPUT mixer allows you to create a custom stereo or six-track mix for output via USB, with independent control over the level and panning of each track, as well as access to effects like low-cut filtering, compression and limiting. In addition, signal that is input to the H6 can be monitored directly before it passes through the connected computer or iPad for zero latency (that is, without any delay). There’s also a handy Loop Back mode that allows you to blend stereo signal coming from the computer or iPad with signal coming into the H6 inputs, useful for live streaming via the Internet or for adding narration to a musical backing track.

- Interchangeable input capsules that can be swapped out as easily as the lens of a camera
- Six-track simultaneous recording
- Four mic/line inputs with XLR/TRS combo connectors
- Gain controls (real knobs!) and -20dB pads for each input
- Phantom power for all main inputs: +12/+24/+48V
- Large full-color LCD display, angled so it’s easy to read in all environments
- Records directly to SD, SDHC and SDXC cards up to 128GB
- Up to 24-bit /96kHz audio in BWF-compliant WAV or a variety of MP3 formats
- Auto-record, Pre-record and Backup-record functions mean that you’ll never miss that perfect take
- Multitrack to stereo internal mixdown
- Independent monitor and playback mixes
- Virtual VU meters
- Voice memo and up to 99 marks per recording
- Overdubbing, up to 99 takes
- Built-in effects, including low-cut filtering, compression and limiting
- Onboard MS decoding
- Normalize, Divide and Trim editing
- Chromatic tuner and metronome
- A/B loop playback
- Variable playback speed, from 50% to 150%
- Variable pitch per track without affecting playback speed
- USB port for data exchange to and from computer
- Multichannel and stereo USB audio interface for PC/Mac/iPad
- Camera strap mounts
- Mountable directly to DSLR or camcorder with optional HS-01 Hot Shoe Mount adapter
- Accepts standard AA alkaline or NiMH rechargeable batteries
- Over 20 hours of operation with 4 AA alkaline batteries
Laatst bekeken